One hundred and eighty!

On Friday 20th May 2022, The HummingBirds completed their first official fundraiser!

The HummingBirds were given the first ever embroidered official home shirt of AFC Whyteleafe. It was on 4 th September 2021 that AFC Whyteleafe played the first league game of their existence, and it was a shirt made for that game, which was donated to the charity. AFC Whyteleafe is a new club, which was created to fill the large empty space left in the local community following the demise of Whyteleafe FC. The Whyteleafe Stadium is a hub for the local community, with good facilities, passionate fans and countless teams of all ages and both genders. The effect the Whyteleafe Stadium has on, and the opportunities it allows for the community, really resonates with the charity; equally, the work the charity is aiming to complete in the Caribbean really resonates with AFC Whyteleafe.

After first meeting Mr. Kelly Waters through supporting friends and family during the open player trials for the new club, I spent more time with and around the club, doing what I could to support what they were doing and helping with the coaching. I got a good vibe and believed I met good genuine people, who shared similar values to me and wanted similar things. I spoke with Mr. Waters a few times about what he has chosen to do and why. I asked about what he was having to do, why he chose to invest into the club, where he wants to take it and what he wants to achieve. It was refreshing and inspiring that someone had similar ambitions to the charity and had started what we all believe will be a very rewarding journey.

Let me take this moment to be clear; as much as we might be led to believe that a football club is an opportunity to make money, this is not often true and not why Mr. Waters begun this journey. Like The HummingBirds charity, Mr. Waters believes that the power and potential of sport is immeasurable. He too believes that sport can affect everyone, mentally, physically, socially and more, giving us something to do, with someone, and potentially so much to get (from out the house and fit, to trophies and trips abroad). Mr. Waters himself felt the love, energy and community from the Whyteleafe FC supporters, making clear the value of sport to a community. What he felt from them, played a major part in him embarking on the new journey with AFC Whyteleafe. Mr. Waters was fortunate enough to be able to secure regular usage of the Whyteleafe Stadium. He knows first- hand the need for, and importance of having, a suitable sporting facility. He understands the ambition of our project, what we want to achieve and how we want to help, and Mr. Waters is more than happy to support us along the journey.

AFC Whyteleafe donated its first ever shirt to The HummingBirds charity, for us to raffle to the hundreds of fans who regularly attend home games to support the club. Over a few weeks, we were able to film every player who made a competitive appearance for AFCW during the 2021/22 season signing the shirt. This marked their personal achievement of playing for the club in its inaugural season and their support of the charity.

When the shirt was signed and ready to raffle, I felt it needed something more, like a finishing touch. I remembered most of the shirts I have seen in the past were framed, and what a difference it makes to them. I feel it makes them feel more like a prize, like an award, so thought that framing the shirt would be a good idea. I went on a little hunt and spoke to a few shops who frame shirts. Some shops quoted me prices close to £300 to frame a shirt. Those numbers were a shock and something that I was going to avoid. I did find TVS Framing, a company based on an industrial estate in Croydon. I chose to visit the warehouse, and in doing so, I met the founder and director Terry Smith. We had an enjoyable conversation. He was familiar with Whyteleafe FC and AFC Whyteleafe, and we spoke about the charity, what we are trying to achieve and how. During that conversation, he made it clear that he was happy to help us by framing the shirt at a much-reduced rate. And then he went on to donate funds to the charity!

I hoped that by framing the shirt, it would increase the interest and success of the raffle. We were all very happy with the job that Terry Smith and TVS Framing done for us. I am sure will do something similar in future and it will only be TVS we ask to frame for us. If you would like to frame something (mirrors, posters, etchings, signed prints, boxed frames, oil paintings or something else), you must click the following link to TVS Framing, truly ‘highly versatile picture framers’. 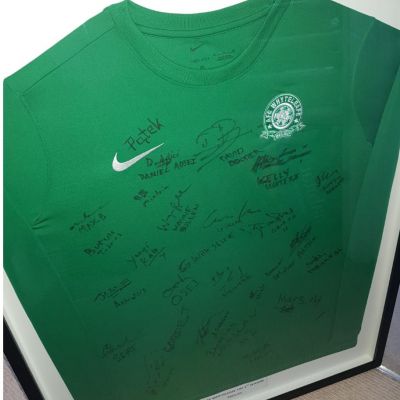 We had set a target and a limit of 300 tickets and believed that we could sell all 300 tickets. We added a ‘Raffle’ page to The HummingBirds website, which gave information of the prize, an opportunity to buy tickets online and an ongoing countdown to when the draw was going to be made. The fact AFC Whyteleafe were averaging well over 350 people at their last few home games made us even more confident. But unfortunately, we missed out on selling tickets to the many supporters who attend home games. Before we started selling the tickets, we wanted to make sure that the video showing the shirt being signed was ready. That video includes an interview from Mr. Waters and numerous clips of players and staff signing the shirt. Completing the editing of a short video that we would be happy to post on our social media and YouTube account took longer than we imagined. We learnt a few lessons and managed to get it done. But we missed the last few home games of the season, both of which saw over 500 supporters. We took the raffle book to the last two league games, both were away, and managed to sell tickets to travelling supporters.

Knowing how society is changing and that cash is only used a fraction of the time, we took with us our card reading device. The HummingBirds charity invested in this device to collect cashless donations quickly and easily. We had used it a few times before, so knew that it worked and had a good idea how to use it. What we did not know was how it recorded some of the data it uses. For example, it can instantly email a receipt. But if it does, can we access and use that email address again in future? We sold a good number of tickets at the first away game we attended, being sure to take email addresses to email receipts of payment. I thought that by doing this, we could later email a confirmation of ticket numbers and use their email address to let them know what happened with the draw. I was wrong. In this situation, taking the customers email address to send a receipt, is seen as personal/sensitive data, that the company does not keep and/or share due to General Data Protection Regulations (GDPR). So, I had lost contact details for the ticket buyers, only being left with the last four digits of the bank card they used to buy their tickets.

Realising this during the week, after numerous calls to the financial technology company, we needed a plan. We needed to be able to contact those who had bought a ticket. At that point, all we had were the last four digits of their card. We went to the next and final game of the season, another away game. We wanted to support the AFCW team, sell more tickets and hopefully attach some email addresses to payment card details. Fortunately, we were able to do all three! Many of the committed supporters were there the previous week and recognised me. Some bought more tickets, while others matched their last four digits and gave me their email address to attach to it. Everyone gave me permission to use their email address to subscribe them to the charities mailing list. More progress was made as the supporters continued to support the team and The HummingBirds charity.

The draw took place on 25th May 2022, at AFC Whyteleafe’s end of season event.  This was an occasion for people to get together and celebrate the season had.  That event was a success, attended by nearly every player who had played for the club that season, enjoying good vibes and sharing fond memories.  The HummingBirds were invited to the event and told that we could draw the ticket and address the crowd.  We saw the event as an opportunity to continue selling tickets and to share with the supporters the work and ambitions of the charity.  We took the opportunity for both!

We sold more tickets on the night and had the details of nearly every single ticket buyer.  By the time the draw was made, 251 tickets had been sold.  I was happy with that.  But it did feel like we could have sold all 300 if we had made it to a home game to sell tickets. 180 was the winning ticket number that was drawn.  The lady that bought that ticket was there on the night to enjoy her success and collect her prize.  It was a bit of a roller coaster she was on.  She bought her few tickets that night, won the raffle and then donated her prize to the clubhouse to be hung on the wall!  Moments like that remind me of community and continue to fuel me to make this development a reality, allowing the development of more communities, enabling more communities to do more together, with, and for each other.

Reflecting on the first ever fundraising event of The HummingBirds, we all agree that the raffle was a success!  We were able to introduce The HummingBirds charity to a lot of people, produce a new video, raise funds for the charity and learn a good few valuable lessons.  The funds raised from this raffle played a major part in shipping and clearing needed resources for schools in St. James, Jamaica.